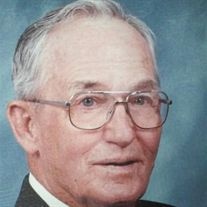 Funeral services for Arthur Brown (A.B.) Harrison, 93, of Cotton will be held at 11:00AM on Friday, July 24, 2015 at Willis-Jamerson-Braswell Funeral Home Chapel. The Rev. Neal Hager will officiate and interment will be in Pinecrest Memory Gardens. Born July 1, 1922 in Pavo, Georgia he was the son of the late Monroe and Eunice Irene Cook Harrison. He was married for 68 years to Catherine Tinsley Harrison who survives. He was a member of Southside Baptist Church in Camilla, worked for Cagle in the hatchery and was over the farm at Mitchell County Correctional Institute and a veteran in the United States Military. Pallbearers will be Stephen Bullard, Jonathan Martin, Barry Hall, Wendell Tillary, Scott Martin and Christopher Bullard. Survivors other than his wife include a daughter and son-in-law, Eunice Irene Weems and Gerald of Phenix City, Alabama and a daughter, Debbie Herring of Columbus; four grandchildren, Jenny Wingate Spivey of Columbus, Scott Martin of Albany, Wendell Tillery of Leesburg and Whitney Hall of Leesburg and 10 Great Grandchildren. He was preceded in death by his parents, a son, Arthur V. Harrison and brothers and sisters, Bennie Harrison, Tommy Harrison, Ross Harrison and Minnie Lee Curles. The family will receive friends at the funeral home on Thursday, July 23, 2015 from 6:00-8:00PM. Willis-Jamerson-Braswell Funeral Home, Pelham

To order memorial trees or send flowers to the family in memory of Arthur Brown (A.B.) Harrison, please visit our flower store.