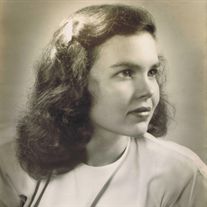 Funeral services for Bonnie Davis Rogers, 85, of Pelham will be held at 11:00AM at First Baptist Church on Thursday, June 18, 2015. The Rev. Matt Peek and Rev. David Pickering will officiate and interment will be in Pelham City Cemetery. Mrs. Rogers passed away June 16, 2015 at Golden Living Center in Thomasville. Born in Pelham on January 13, 1930 she was the daughter of the late Henry and Ester Hand Davis. She was a homemaker and a member of the Pelham Garden Club and Pelham First Baptist Church. She was married to Gilmore Rogers who preceded her in death. Pallbearers will be Lee Glenn, Scott Connell, Jeff fletcher, Scott Conley, Autry Brooks and Rhett Whitley. She is survived by her sons and daughter-in-laws, Rob and Shirley Rogers of Pelham; Matt and Nancy Rogers of Hahira; Grandchildren, Trey and Nancy Rogers of Camilla; Brandon and Deana Rogers of Meigs; Rachel and Bryan Scaff of Houston, TX; and Grier Rogers of Hahira and Great granddaughter, Caroline Rogers of Meigs; and a brother and sister-in-law, Owen and Patty Davis of Ft. Valley, GA ; a special friend and caregiver Vette Merritt and Numerous nieces and nephews. She was preceded in death by her husband, parents and a son, Clay Rogers. The family will receive friends a hour prior to the service at Pelham First Baptist Church. Friends may sign the online guest register at www.willlisjamersonbraswell.com Willis-Jamerson-Braswell Funeral Home, Pelham

To order memorial trees or send flowers to the family in memory of Bonnie Davis Rogers, please visit our flower store.