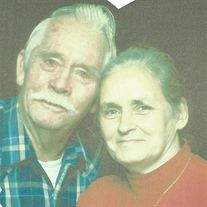 Funeral services for Earl Edward Harper, 74, of Pelham will be held at 2:00PM Sunday, March 8, 2015 at Willis-Jamerson-Braswell Funeral Home. The Rev. Gerald Willis will officiate and interment will be in Meigs Sunset Cemetery. Born March 24, 1940 in Perry Florida he was the son of the late George Ernest Harper and Ruby Lee Wilson who survives. He was a maintenance and landscaper for the Pelham City School System and a veteran of the United States Army and Member of the Pelham Church of God. He was married to Pearl Ellis Harper who survives. Survivors include his wife of 22 years, Pearl Ellis Harper of Pelham; Children, Chris Harper, Mary Napoli and Melissa Staples all of Clearwater, Fl; a step-Daughter, Tina Lord of Pinellas, Fl; mother, Ruby Lee Wilson of Pelham; two brothers, Gordon Harper of OK and James Harper of Pelham and numerous grandchildren and great grandchildren. He was preceded in death by his father, George Ernest Harper, a brother, William E. Harper and sister, Nettie Faucett. The family will receive friends on Saturday at Willis-Jamerson-Braswell Funeral Home from 6:00-8:00PM. Friends may sign the online guest register at www.willisjamersonbraswell.com. Willis-Jamerson-Braswell Funeral Home, Pelham

To order memorial trees or send flowers to the family in memory of Earl Harper, please visit our flower store.