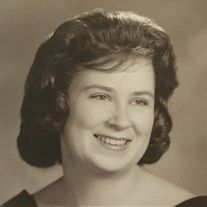 Services for Elizabeth Jane (Betty Jane) Bell of Meigs, will be held on
Monday, June 22, 2015 at 1:00 PM at the Hand Memorial United Methodist
Church in Pelham. The Rev. Carrie Myers and the Rev. Lowell Freeman will
officiate. Mrs. Bell passed away at her home on June 20, 2015 after an
extended illness. She was born in Glassboro, N. J., on July 13, 1942, to James F. and
Elizabeth T. Cogan, both of whom preceded her in death. Her family moved
to Florida when she was seven, and they ultimately settled in Tallahassee,
where she met and then married Darius Wilborn (D.W.) Bell, Jr. on July 11,
1964. They moved to Meigs in 1966 and raised their five children.
She attended Florida State University and graduated from Thomas College
and Valdosta State University. She worked as librarian at Ravenwood
Academy while her children attended school. Once she received her
master's degree in psychology from VSU, she became a mental health
counselor and worked primarily with children at Georgia Pines in Pelham
until her retirement. Mrs. Bell was an active member of the Hand United Memorial Methodist
Church and the Pelham Rotary Club until her illness. She served the
Rotary Club as president and received numerous awards including 15 years
perfect attendance, the Family and Community Service Award and was a
contributing Paul Harris Fellow. She is survived by her husband, D. W. Bell, Jr.; daughters, Carolanne Redfearn of Thomasville and Sallianne Gomez (Israel) of Huntsville,
Alabama; sons, John Bell (Anise) of Greenville, Jeff Bell (Craig
Carruthers) of Valdosta, and James Bell (Danielle Miller); and
grandchildren, Emily Singleton of Camilla, Cole and Lexie Redfearn of
Thomasville, and Ethan and Declan Gomez of Huntsville. She is also
survived by her brother, James F. Cogan, Jr. (Kim), of Callahan, Florida.
The family will receive friends immediately the following the service in
the church social hall. Friends may sign the online guest book at
www.willisjamersonbraswell.com In lieu of flowers, memorials can be made
to The American Cancer Society and Hand Memorial United Methodist Church
Preschool. Willis-Jamerson-Braswell Funeral Home, Pelham