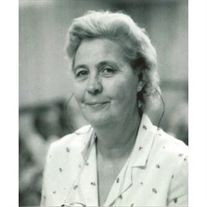 Funeral services for Frances Barwick Castleberry, 88, of Pelham will be held on Sunday, September 28, 2014 at 3:00PM at Willis-Jamerson-Braswell Funeral home. Rev. Ricky Griner and Rev. Matt Peek will officiate and interment will be in Pinecrest Memory Gardens. Born September 5, 1927 in Mitchell County she was the daughter of the late Thomas E. Barwick and Mary Brock Barwick. She was married to William Thomas Castleberry who preceded her in death and worked at Coats and Clarks. Mrs. Castleberry passed away September 25, 2014 at Wilson Hospice House in Albany. She was preceded in death by her daughter and son-in-law, Linda Diane Cox and Richard B. Cox, a sister Ernestine Haag, a sister, Juanita Palmer and a brother Jesse Carroll Barwick. Survivors include a son, William Allen Castleberry of Pelham; 2 grandsons, Allen Tristan Castleberry of Pelham and Mark Cox of Cairo; and a granddaughter and Grandson-in-law, Diana Brett Roberts and Darin; and Great Grandchildren, Bryce Roberts, Bentley Roberts, Justin Williams and Raven Cox and one great great grandchild, Kai Williams; 2 nephews, Ken Palmer and Billy Haag and 2 neices Kelly Shugeat and Kim Barnes. The family will receive friends at the funeral home from 6-8PM Saturday at Wilis-Jamerson-Braswell Funeral Home, Pelham friends may sign the online guest register at www.jamerson-braswell.com. Willis-Jamerson-Braswell Funeral Home, Pelham

To order memorial trees or send flowers to the family in memory of Frances Castleberry, please visit our flower store.