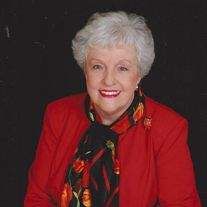 Funeral services For Glenda Sterling Harris Glover, 76, of Pelham will be held on Thursday, July 30, 2015 at 11:00AM at The First Baptist Church in Pelham. The Rev. Matt Peek will officiate and interment will be in Pelham City Cemetery. Pallbearers will be Kyle Fleming, Kevin Fleming, Bryce Fleming, Jimmy Godwin, Mark Harris and Mitchell Glover. Honorary pallbearers will be Carlos (Bud) Adkins, Jr., Paul Miller, Kenneth Fleming, Herman Roberts and Buddy Brinkley. Mrs. Glover passed away Monday at Archbold Memorial Hospital. Born December 26, 1938 she was the daughter of the late Raymond and Ila Watson Harris. Mrs. Glover was the wife of the late Weyman Glover. She was a homemaker, a member of Pelham First Baptist Church where she was a member of the Believers Sunday School Class and active in many programs including Meals on Wheels. She is survived by her sons, Harris Blaine Glover and Hayden Lamar Glover both of Wake Forest, NC; four grandchildren Alexandra Scanlon(Josh), Mitchell Lee Glover, William Harris Glover and Caleb Alexander Glover; and a sister, Gail Harris Willis of Decatur, AL and nephew Richard Willis. The family will receive friends Wednesday from 5:00PM-7:00PM at the funeral home. Friends may sign the online guestbook at www.willisjamersonbraswell.com. Willis-Jamerson-Braswell Funeral Home

To order memorial trees or send flowers to the family in memory of Glenda Sterling Harris Glover, please visit our flower store.