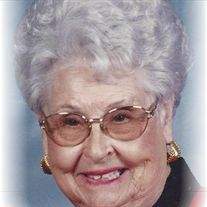 Lorene Reynolds Dawson McDonald of Pelham Georgia, passed away peacefully Friday, June 20, 2014, at the age of 89. She was born in Grady County, Georgia on October 15, 1924 to the late Horace and Pearl Reynolds. Lorene was a retired associate for Wal-Mart after many years of dedicated service. She was a member of the Union Grove Baptist Church of Pelham. She was preceded in death by her beloved husbands, S.J. Dawson and Marvin McDonald, her parents the late Horace and Pearl Reynolds, her brother Curtis Reynolds and sister Carrie Singleton Crosby. She is survived by her sister Thelma Reynolds Glover and husband Troy, three nieces, Rhonda Peek, Brenda Griggs, Diane Rentz and two nephews, James Singleton, Terry Reynolds who loved her dearly. Visitation will be held on Monday, June 23, 2014 from 6 until 8 pm at Willis-Jamerson-Braswell Funeral Home in Pelham, Georgia. Funeral services will be conducted on Tuesday June 24, 2014 at 11:00 am in the chapel of the funeral home with Rev. Doug Hall officiating, assisted by Rev. Steve Wooten. Pallbearers will be Les Pollock, Cory Peek, Charles Humphries, Gary Singleton, Flip Harper and Billy Ross. Interment will take place in Pinecrest Memory Gardens. Memorial contributions to Union Grove Baptist Church may be made.

To order memorial trees or send flowers to the family in memory of Lorene Dawson McDonald, please visit our flower store.