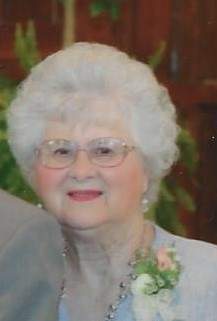 Funeral services for Mary Dines Hunnewell, 81, of Valdosta, formerly of Pelham, will be held on Saturday, July 14, 2018, at 9:00 a.m. at Willis-Jamerson-Braswell funeral home, Pelham.  The Rev. Doug Hall will officiate and interment will follow at Union Grove cemetery.  She passed away on Monday, July 2, 2018 at South Georgia Regional Medical Center in Valdosta.  Pallbearers will be Chase Hunnewell, Jason Hunnewell, Richie Hunnewell, Bill Whitfield, John Whitfield and Chris Gaither. Born on May 3, 1937 in Pennfield, New Brunswick, Canada, she was the seventh daughter of the late William Sydney and Katherine Dines. She married the love of her life, Charles Dallas Hunnewell, in 1954.  Mary often shared stories with her family about her early married life in Cape Cod, Massachusetts, where her first son was born, traveling by ship with her young son to meet her husband at Kadena A.F.B., Okinowa, Japan, where they welcomed their second son, and two years later moving to Sandia A.F.B., Albuquerque, N.M., where they raised their sons for the next several years.  She experienced and enjoyed the adventures of military life with her husband.  Upon Mr. Hunnewell’s retirement from the USAF,  at the urging of special friends made while in Okinowa, they moved to Pelham, Georgia where they made many new friends and welcomed a third son in 1969.  While she and her husband continued to raise their family, Mary established a distinguished career with Mitchell County Hospital where she retired as Director of Medical Records.  She and Charles were married for 55 years before his passing in 2010.  Mary was a longtime active member of Union Grove Baptist church in Pelham.  She enjoyed her life in the local community here until 2013, when she moved to Valdosta to be closer to family members. Survivors include her three sons, Royden Charles William Hunnewell and wife Kathi of Valdosta, Rodney James Hunnewell and wife Joye of Leesburg, Richard Dines Hunnewell and wife Dawn of Thomasville; seven grandchildren, Charles Edward Hunnewell of Valdosta; Mary Katherine Hunnewell Gaither and husband, Chris, of Leesburg, Jason Barkley Hunnewell and wife Lacy of Albany, Meggan Joyce Hunnewell of Leesburg, Richard Dines Hunnewell Junior and wife Afton of New Mexico, Rebekah Dawn Hunnewell of Columbus, and Renee Starr Danielle Hunnewell of Dahlonega; two great granddaughters, Hailee Renee and Halle Grace Hunnewell; and eight siblings, Margaret Johnston, Joyce Thompson, Gloria Boyce, Charles Dines, Prescott Dines, Alan Dines, Vera Richardson and Ethel Finnagan.  Preceding her in death were her parents, Sydney and Katherine Dines, her husband Charles Dallas Hunnewell, her infant granddaughter, Ashley Rose Hunnewell, and three siblings, Sherman Dines, Gladys Mahar and Bernice Durelle. The family will receive friends from 6 to 8 p.m. on Friday, July 13 at Willis-Jamerson-Braswell funeral home in Pelham.

To order memorial trees or send flowers to the family in memory of Mary Hunnewell, please visit our flower store.