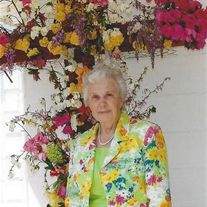 Funeral Services for Myra Faye Joiner Whitson,86, of Cotton passed away Sunday, February 22, 2015 at Mitchell County Hospital will be held Thursday, February 26, 2015 at 11:00 AM at Willis-Jamerson-Braswell Chapel. Rev. Tammy Fincannon will officiate and interment will follow at Pelham City Cemetery. Born September 14, 1928 in Colquitt County she was the daughter of the late Elijah Jefferson (EJ) Joiner and Irma Lucille Gordon Joiner. She was married for 63 years to Fredric Whitson who preceded her in death in 2010. She was retired as postmaster and owner of Whitson's Store in Cotton. She was a member of Burns Memorial Methodist Church, Cotton Homemakers and United Methodist Women and served at the local food bank. She is survived by her son and daughter-in-law, Freddye and Betty Whitston, a daughter and son-in-law, Fran and Walter Sealy, Grandchildren, Wendi and Mike McCook, Jennifer (J.J.) and Kris Weaver, Erin and Austin Walker, Justin and Ashley Sealy and Chelsea and T. J. Tucker. Other survivors include Great Grandchildren, Kerstan McCook, Traye McCook, Claye McCook, Arlie Walker and Whitston Walker and two sisters, Bobbie Thomas and Judy Knight and Husband Dale . She was preceded in death by her parents, husband, and two infants and sisters, Nadine Wilson and Peggy Tuggle. Pallbearers will be T.J. Tucker, Kris Weaver, Austen Walker, Mike McCook, Traye McCook, Claye McCook, Arlie Walker and Whitston Walker and honorary pallbearers will be Herman's Adult Sunday School Class. The family will receive friends on Wednesday, February 25, 2015 from 6 PM to 8 PM at Willis-Jamerson-Braswell Funeral Home.

To order memorial trees or send flowers to the family in memory of Myra Faye Joiner Whitston, please visit our flower store.