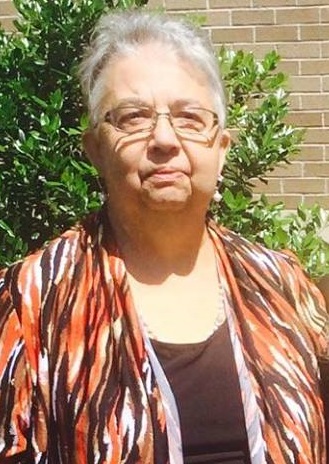 Funeral services for Patty Welch Bufford, 74, of Cotton will be Wednesday, May 31, 2017 at 4:00PM at Willis-Jamerson-Braswell Funeral Home. The Rev. Doug Hall and Rev. Less Pollock will officiate and interment will be in Pinecrest Memory Gardens. Born March 6, 1943 in Camilla she was the daughter of the late William Roy and Nannie Clyde Carter Welch. Aunt Patty passed away Saturday, May 27, 2017 at her residence. She was married to Albert Franklin Bufford who preceded her in death on September 8, 2004. She was a member of Union Grove Baptist Church. Pallbearers will be Robby Willis, Rory Nesmith, Matthew Free, David Rorie, Michael Long and Ricky Wiggins. Honorary Pallbearers will be Ronald Godwin, Randy Poole, Teddy Godwin, Alex Morrell, Steve Morrell and Wade Sexton. She is survived by her daughters, Diane Russell (Marty) of Pelham; Lynn Burgess (Walter Vickers) of Pelham, Albert Bufford, Jr. (Kris) of Pelham; Wally Bufford (Tracy Kellett) of Pelham; numerous grandchildren and Numerous Great Grandchildren and Nieces and Nephews. Other survivors include a brother, Bill (Kathy) Welch of Pelham; Sisters, Mary Davis of Pelham; Barbara Carroll (Randall) of Rose Hill; Linda Norman (Keith) of Meigs. She was preceded in death by her parents, husband, and a son Walter Thomas Bufford. The family will receive friends at the funeral home on Tuesday, May 30, 2017 from 6:00-8:00PM. Friends may sign the online guest book at www.willisjamersonbraswell.com Willis-Jamerson-Braswell Funeral Home, Pelham

To order memorial trees or send flowers to the family in memory of Patty Bufford, please visit our flower store.