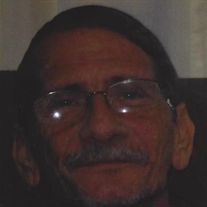 Memorial services for Richard Henry Thompson, 58, of Pelham will be held Thursday, May 21, 2015 at 2:00PM at Willis-Jamerson-Braswell-Braswell Funeral Home Chapel. The Rev. Jeff Brooks will officiate. Born October 3, 1956 in Cairo, Ga he was the son of the late Charles Wayne Thompson and Martha Jones Thompson of Pelham who survives. Mr. Thompson was a paint contractor and a member of the Church of Christ. Survivors include his mother, Martha Thompson of Pelham, wife, Cindy Hymer Thompson of Athens, sister and brother in law, Teresa and Dwayne Coker of Pelham, a sister, Latrelle David of Athens and a brother and sister-in-law, Keith and Ann Marie Thompson of Union City and numerous nieces and nephews. Friends may sign the online guest register at www.willisjamersonbraswell.com. Willis-Jamerson-Braswell Funeral Home, Pelham

To order memorial trees or send flowers to the family in memory of Richard Henry Thompson, please visit our flower store.