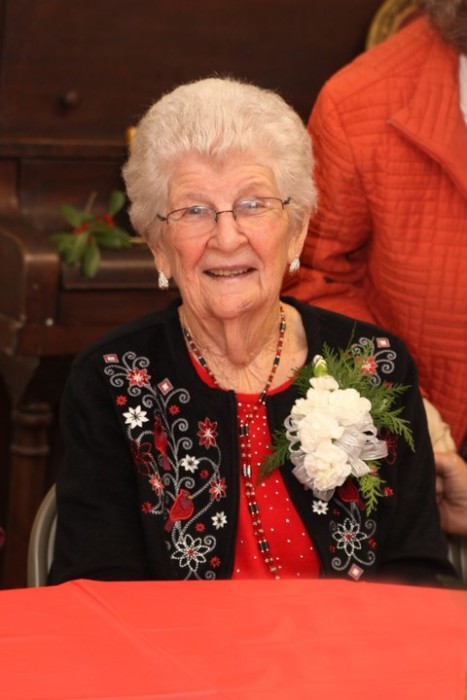 The daughter of the late Howard and Maggie Curles, Sallie Dora Curles Williamson was born on December 14, 1924 in Harmony, Georgia.  In her early years, she learned to cook and sew; quilting her first quilt at around the young age of 6.  She attended elementary school in the community of Harmony.  She was known to have talked about her days at school and how they would walk across the street to attend Chapel each morning for a devotion and prayer.  After graduating from Pelham High School, she attended Business School in Albany, Georgia.  Along this time she met her husband, the late Gardner Williamson.  From them two rambunctious boys were born, Fred  Williamson and the late David Williamson.  She was very proud of them both.  She worked for a period of time at Coats and Clark in Albany, Georgia, but was always devoted to her husband and children as a homemaker.  After their children were grown, they made their home in Pelham, Georgia.  She had a deep love of family, enjoyed cooking, traveling, sewing, and in her earlier years she loved to dance. She was a caregiver, always ready to help one in need, may it be an extended stay to care for one who could not care for themselves or to cook a meal for one who was sick.  Always giving, rarely did a neighbor or friend stop for a visit and not leave her home with a treat or a craft that she made.   Always independent, she spoke her mind and stood by her values and beliefs.  She was a Christian and a member of Harmony Baptist Church.  She entered death on March 29, 2018 in Cotton, Georgia, less than 5 miles from the place of her birth. Survivors include a son Fred Williamson (Linda), grand-children Dallas Williamson (Danielle), Ron Williamson (Angela), and Daniel Williamson (Amanda), 7 great-grandchildren and a host of nieces and nephews. She was preceded in death by her parents Howard and Maggie Curles, husband Gardner Williamson, son David Williamson, and a grandson Matthew Williamson. Services will be held April 2, 2018 11:00AM at Harmony Baptist Church. Rev. Olen Cain and Rev. Nathan Fowler will officiate. The family will receive friends at the church from 10:00AM-11:00AM on Monday. Terry Curles, Adam Curles, Marc Curles, James Sanders, Gene Behal and Larry Wade will serve as pallbearers. Willis-Jamerson-Braswell Funeral Home, Pelham

In lieu of flowers, the family requests that donations be made to Harmony Baptist
Church or Southwest Georgia Hospice.

To order memorial trees or send flowers to the family in memory of Sallie Dora Williamson, please visit our flower store.