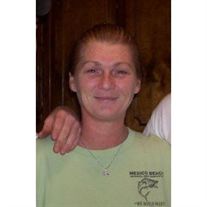 Memorial services for Tarri Lynn Harvey Watson, 52, of Pelham will be held
Saturday, October 11, 2014 at 2:00PM at Mt. Olive Baptist Church, Rev.
Nathan Fowler will officiate. Tarri passed away October 9, 2014 at her
residence. Born January 27, 1962 she was the daughter of the late Esker
Glenn Harvey and Geraldine Hancock Harvey. She was a home caregiver. She
is survived by her sons, Joseph Watson and Jessie Watson of Pelham; a
sister Gail Harvey of Albany; three nieces, Jill Johnson, Jay Brock and
Terry Brock and four grandchildren, Ashton Watson, Tess Watson, Layla
Watson and Arissa Curry. She was preceded in death by her sister Cindy
Carr and her mother and father. Willis-Jamerson-Braswell Funeral Home,
Pelham

To order memorial trees or send flowers to the family in memory of Tarri Harvey Watson, please visit our flower store.