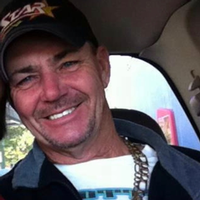 Tollie Ray Horne, Jr., 59, of Moultrie, passed away on Saturday, May 11, 2019 at Colquitt Regional Medical Center. A memorial service will be held on Thursday, May 16, 2019 in the chapel of Baker Funeral Home at 2:00pm. Born on March 25, 1960, in Moultrie, Georgia, he was the son of the late Tollie Ray Horne, Sr. and Alberta Richardson Horne. He was the owner of R&R Auto Parts and Repair. In addition to his parents, he was preceded in death by his grandparents, Virgil Lee Horne and Ella Pecola McCook Horne (Cora) and Leola Richardson McCord and Albert Richardson. He is survived by his daughters Sheree and Anthony Hamilton, Miranda Davis, Becky Giddens, and Brittney Horne all of Moultrie; grandchildren, Sealitta Guemez, Autumn Bayya, Edward Hamilton, Rayland DeMott, Asa Giddens; 4 great grandchildren; brothers and sisters, Buddy Hurst and wife Sharron of Moultrie, Sheila Jones and husband Rayburn of Omega, Gary Horne and wife Ginny of Missouri, Sidney Woodall and husband Scott of Omega, Tray Horne and wife Amanda of Baconton; and several nieces and nephews. Visitation will be held from 6:00pm - 8:00pm in the chapel of Baker Funeral Home on Wednesday, May 15, 2019.

To order memorial trees or send flowers to the family in memory of Tollie Ray Horne, Jr., please visit our flower store.