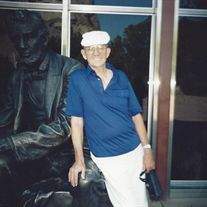 Mr. Tom W. (Buddy) Haire, 88, of Pelham passed away June 18, 2015 at Pelham Parkway Nursing Home. Funeral services will be held at 10:00AM Monday, June 22, 2015 at Willis-Jamerson-Braswell Funeral Home. The Rev. Herman Hampton will officiate and interment will be in Pinecrest Memory Gardens. Born October 15, 1926 he was the son of the late Redden Roland Haire and Sabra Holley Haire. He was married for 67 years to Corine Ball Haire who survives. He was employed by the US Postal Service and a member of East Pelham Baptist Church. Survivors include his wife of 67 years Corine Ball Haire, son, Sonny Haire and a son and daughter-in-law, Reggie and Alice Haire, a daughter and son-in-law, Holley and Bill Taylor, Grandchildren, Hope Donaldson, Lije White, Cindy Dykes, Jasmine Itson, Amber Nash, Ridge Haire, Joel Haire, Ryan Mihaly and Brice Mihaly and a number of great grandchildren. He was preceded in death by his parents, a daughter, Vicki White, son Sidney Haire, grandson, Josh Haire and granddaughter, Amy White. The family will receive friends from 6-8PM on Saturday at the funeral home.

To order memorial trees or send flowers to the family in memory of Tom Watson (Buddy) Haire, Sr, please visit our flower store.