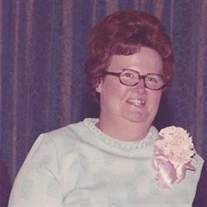 Funeral services for Vertice Lee Cone, 82, of Pelham will be held at 4:00PM Tuesday, December 29, 2015 at Willis-Jamerson-Braswell Funeral Home. Bro. Joe Poitevient will officiate and the family will have a private interment later. Honorary Pallbearers will be the Pelham Parkway Nursing Home Staff and residents. Born February 8, 1933 in Pelham she was the daughter of the late William Harrison Williamson and Georgia Alice Davis. Ms. Cone passed away Sunday, December 27, 2015 at Pelham Parkway Nursing Home. She was a member of Springhill Christian Church. She was married to Bobby Earl Cone, Sr. and Wesley Carroll Cone both who preceded her in death. Survivors include her son, Bobby Earl Cone, Jr. (Marsha) of Pelham and daughter Cynthia C. (Cindy) Carroll (Winston) of Hartsfield; a granddaughter, Georgia Ann Taylor (Josh) of Hartsfield; a grandson, Jason Darrell Tatum (Melissa) of Norman Park; and great grandchildren, Max Parker, Tate Parker, Jossy Taylor and Baylee Ann Tatum, a sister, Vergie Mae Poitevient of Brinson; a sister-in-law, Doris Shelton of Cairo; and a brother-in-law, Larry Cone (Linda) of Ochlocknee and a sister-in-law, Jackie Wilson (Claude) of Thomasville and several nieces and nephews. She was preceded in death by her parents, two husbands, a brother J.W. Williamson and a brother-in-law, Horace Poitevient. The family will receive friends at the funeral home on Tuesday from 3:00PM-4:00PM. Friends may sign the online guest book at www.willisjamersonbraswell.com
Willis-Jamerson-Braswell Funeral Home, Pelham

To order memorial trees or send flowers to the family in memory of Vertice Lee Cone, please visit our flower store.